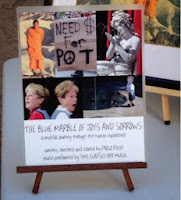 We are excited to announce that we will be sharing this film with our audiences on Nov. 15, 2014 at our In the Flow Studios Arts Showcase and Film Debut. For more information about our event please use link at the bottom of page.

"The Blue Marble of Joys and Sorrows" is a unique and powerful independent short film directed by filmmaker, composer cinematographer, Paolo Pizzi. Paolo takes the viewer on a moving visual and audio journey from the outer-reaches of the cosmos to the the beautiful blue sphere we call Earth. His images and music are perfectly balanced communicating humanity's story without need of verbal dialog.

Paolo uses images of the epic beauty found on our planet and then challenges us with images of the needless suffering brought about by greed, apathy and oppression. He shows us in no uncertain terms what is possible and how poorly we are measuring up to humanity's potential. The film concludes with the most important message and most powerful force in the universe...LOVE. From start to finish "The Blue Marble of Joys and Sorrows" is a feast for the senses. It speaks to our most basic of human emotions and asks us to remember that this world is full of wonders. It asks us to acknowledge the pain, suffering and injustice known by far too many and to find our strength to change the it by remembering our capacity to love. The film ends with a poem written over 150 years ago yet still poignantly relative.
I am!


I am! yet what I am noone cares or knows,
My friends forsake me like a memory lost;
I am the self-consumer of my woes,
They rise and vanish in oblivious host,
Like shades in love and death's oblivion lost;
And yet I am! and live with shadows tost

Into the nothingness of scorn and noise,
Into the living sea of waking dreams,
Where there is neither sense of life nor joys,
But the vast shipwreck of my life's esteems;
And e'en the dearest--that I loved the best--
Are strange--nay, rather stranger than the rest.

I long for scenes where man has never trod;
A place where woman never smil'd or wept;
There to abide with my creator, God,
And sleep as I in childhood sweetly slept:
Untroubling and untroubled where I lie;
The grass below--above the vaulted sky.

"The Blue Marble of Joys and Sorrows" was accepted into several film festivals and has already won important awards. Paolo has kindly agreed to show his film at In the Flow Studios Arts Showcase and will be available for a quick Q & A after the film.


This is what Play4Music has this to say about Paolo's musical score in "The Blue Marble of Joys and Sorrows" Paolo Pizzi Wins at Global Music Awards. Italy triumphs at the Global Music Awards: composer and director Paolo Pizzi has won the Gold Medal at the 2014 edition of the event for his film The Blue Marble of Joys and Sorrows. Global Music Awards goal is to celebrate truly independent musicians, rather than being like other music talent competitions that honor only the best-selling recording artists. GMA is a showcase for original music, unique voices and emerging artists.

Keyboard player for recording sessions and live touring, Pizzi was born in Rome but has been based in Los Angeles for 25 years. He works as film composer, arranger and artistic producer. The Blue Marble of Joys and Sorrows is his first film as a director, a musical journey through the human experience. An example of 'poetic cinema' – film with no dialogue: just music and images. Unlike with conventional films, the music for each of the five chapters was written first, then the images were added to emphasize the message. Play4Music News

Paolo is offering his film to be viewed globally FREE of charge via the internet. This is a testament to his artistic integrity and his generosity of spirit. Humanity is the beneficiary. “There is no humanity in the state. What runs the world is economics and politics, and they have nothing to do with the spiritual life. So we are left with this void. It is the job of the artist to create those new myths. Myths come from the artist.” ~ Joseph Campbell 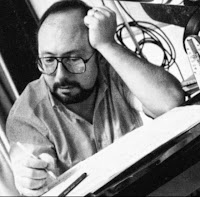 PROFESSIONAL:
- Principal Conductor of Leominster Symphonietta (a chamber ensemble based in Leominster, MA-USA) 1981-1982
- Active in jazz groups and chamber music ensembles, as well as a studio musician in the 1980’s and early 1990’s
- Has recorded 5 CD’s under his own name, reviewed in magazines such as “Keyboard” (US), “Music Technology” (UK) and “Diapason” (France)
- Has written soundtracks for several feature films and documentaries
- Awarded First Prize in the 1988 Atari ST Europe Award for Computer Music (the very first edition)
- Awarded prizes in other composition contests in Europe and the US
- Awarded the prestigious Nino Rota Prize For Film Music in 1991, for his work in “L’Uomo Del Sogno”
- Has scored extensively for theater, working for prestigious institutions like Teatro di Roma, Piccolo Teatro di Milano, Panatenee Pompeiane
- Has written music for ballet companies in Europe and Japan
- Has worked extensively in television, especially for cultural programs and documentaries in Italy, Switzerland, France, Germany, Japan and the US
- His photographs have won prizes and have been displayed in galleries in Europe and the US 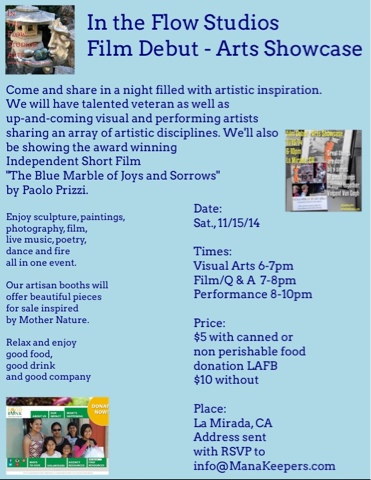 Facebook Event: https://www.facebook.com/events/1490470264570957/
"In the Flow Studios is a grassroots organization dedicated to empowering the arts, the artists and worthy causes."
Posted by ManaKeeper at 3:03 AM