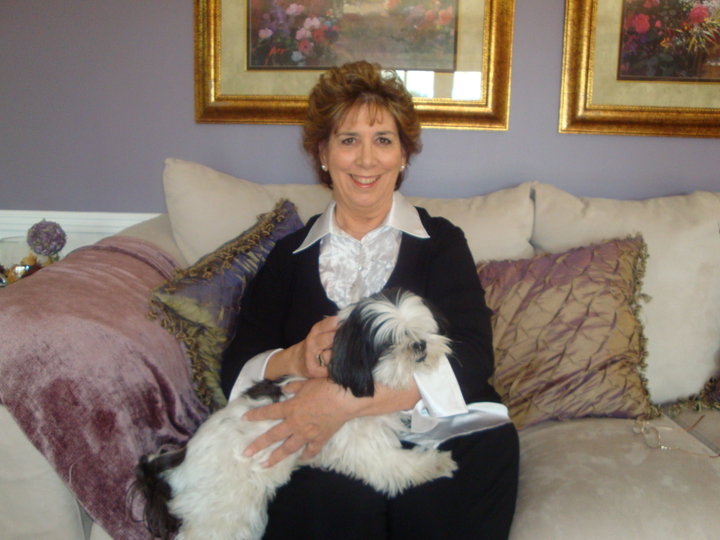 We love Barbara Ann Eknoian! Her poetry is diverse, sincere and poignant. Barbara shares her life experiences through her writing with courage and insight. She has the ability to understand that the little things that go unnoticed are some of the most important things. They are the things that define our lives.

She has kindly accepted our invitation to share her poetry at our In the Flow Studios Arts Showcase and Film Debut on Nov. 15, 2014.

Barbara Eknoian‘s work has appeared in Pearl, Chiron Review, RE)VERB, and Silver Birch Press’s Silver, Green, and Summer anthologies, and Cadence Collective on line. She has received two Pushcart Prize nominations and is a member of Donna Hilbert’s poetry workshop in Long Beach, California. Her first young adult novel Chances Are: A Jersey Girl Comes of Age, and her poetry book Why I Miss New Jersey are available at Amazon. She is currently working on a generational novel.

About Barbara the poet:

Award-winning poet and author Barbara Eknoian affirms with warmth and wit how you can go home again, and shows that you can take the girl out of New Jersey, place her in the fun and sun of California, but you can’t take New Jersey out of the girl. Sit a spell, play the Platters or Nat King Cole’s “A Blossom Fell,” and read how sweetly Barbara casts her spell of eternal, heartfelt longing—her unforgettable hiraeth—for her old New Jersey hearth. She builds vignettes of long-gone family and friends—sometimes ominous—and as fragile and fleeting as snowflakes. Barbara’s tender recollections break bread with her reader as she shares her intimate word album and gently invites us to “come look at another kind of beauty,” and asks in her poem, “Holding On”: “How can you toss out a memory?” Description by Joan Jobe Smith, author, poet, and founding editor of Pearl and Bukowski Review

Barbara was one of 59 poets from around the world who participated in the Silver Birch Press Celebrity Free Verse Poetry Series during September 2014:
http://silverbirchpress.wordpress.com/2014/09/30/thank-you-to-the-poets-who-participated-in-our-celebrity-free-verse-poetry-series/

See the little girl,
quiet and shy,
after a family blow-up,
warily observing
the grown-ups.
See the teenager
longing to be asked
to dance a slow number
with that handsome boy,
and then at sixteen
unaware
that she was looking her best
drifting in the rowboat
imagining
the world before her.
See the shy bride,
almost twenty-one,
marrying a little too soon,
praying
she’s made the right choice.
See the young mom
moving across country
homesick
away from family
and dear friends,
and the young woman
back at school,
serving as editor
of the college paper,
then leaving to care
for her family.
See the woman
thrilled to celebrate
her 50th anniversary,
and now the widow
still longing
for the dance.

About Barbara the author:
“Chances Are”
It's the l950's. Teenager, Susie Di Pietro, lives near the projects in New Jersey. Bookies stand on the corner by the candy store and sound like characters from Guys and Dolls. Everyone plays the numbers, even young Susie.
Throughout her high school years, she's painfully aware that her pal, Ginger, and she are wallflowers. Susie shares her romantic tribulations, her trials with her teachers, and funny incidents that happen to her while she is growing up.
Chances Are is a charming coming-of-age novel that will take you on a nostalgic trip: dancing to Johnny Mathis, Elvis, and The Platters. It will trigger fond memories for some readers of their teen years, and give younger readers a picture of that special era, "The Fifties."


“Getting Real”
A short-story Romance

Laura Bingham, a 40-year-old attractive widow with a 17-year-old daughter has put her life on hold to be the perfect single parent. Her hobby is writing and she submits a story on-line, and is miffed when the editor, unfavorably critiques her work.
Co-incidentally they wind up on-line at the same time, and discuss her work. He suggests she retry his publication, but wants her to change it according to his perspective. In the meantime, both her best friend and mom, coax her to join SOULMATES, because she never dates and is missing out on life. Her usual reply is, “I’m holding out for George Clooney.” They assume that she’s kidding, and are not aware that she seriously fantasizes about him and lives vicariously in her daydreams.
When she develops writer’s block and is at a loss for a subject to write about, her best friend suggests, “Why not write about Clooney.”
Without hesitation, she writes the story and submits it to Steve Hudson, the editor, who had originally turned down her earlier story. Surprisingly, this editor invites her to a writing conference where he’s one of the main speakers. He is quite charming when they meet, but not at all George Clooney-like. Nonetheless he invites her to dinner at the Rainbow Room high above Manhattan... 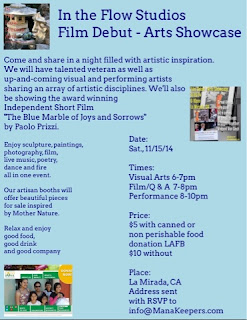 "In the Flow Studios is a grassroots organization dedicated to empowering the arts, the artists and worthy causes."

Posted by ManaKeeper at 1:55 AM